Traveling through the Dark 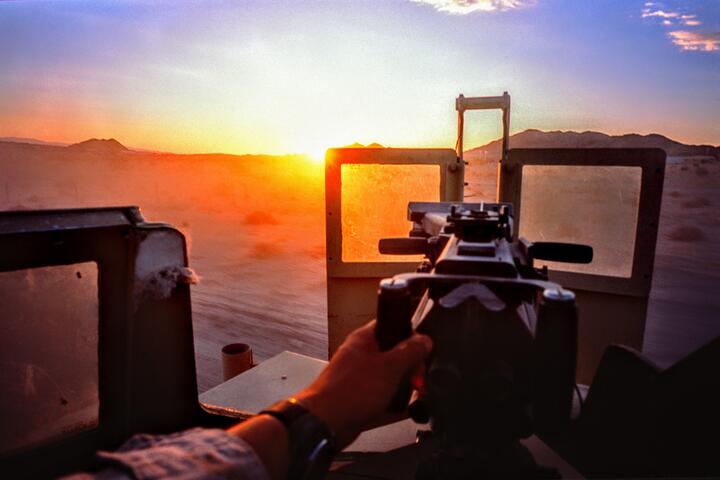 When kissing one's child, one should, said Epictetus, say to oneself: "You will perhaps die tomorrow." Ill-omened words, these! "No word is ill-omened", he said, "which signifies a natural process. Else it would have be ill-omened to say that the wheat has been harvested."

On the morning of October 7, on my way to the Roosevelt Island pool, I came across a belted kingfisher flailing on the ground. It was unable to move, except by dragging its body, and looked terrified by this newfound vulnerability. 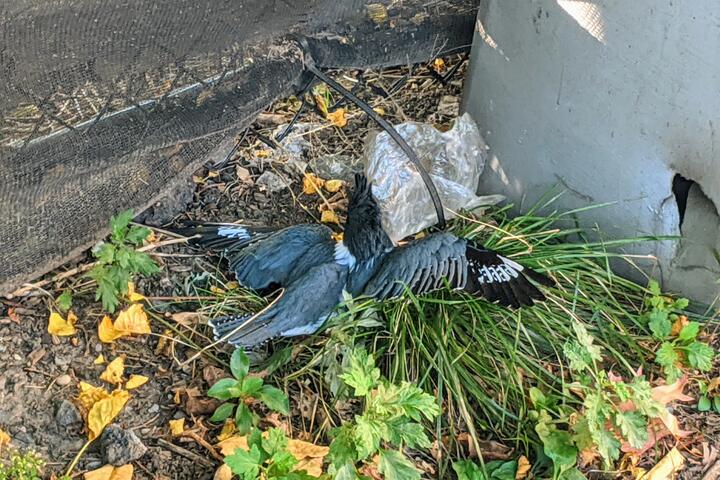 I did not know what to do. But others started to walk past, and then a few cars rumbled along the road; then, I knew I could not leave. As I picked him up -- he was a male -- I could feel his heartbeat accelerate, strikingly powerful in such a light body. My heart too, began to beat a little faster.

I contacted the local wildlife rehabilitator and asked her if I could bring him in. When she said yes, I started walking back home, holding the bird gently against my chest. To my surprise, his heartbeat settled -- until we passed our first dog. Then, he began to squirm, and again I could feel the drumming in my hands. When the dog went out of sight, he was calm again.

This happened a few more times. It was a sunny morning, and many were out for their first stroll. Each time we began to draw near a dog, I could feel the kingfisher's heart beat faster -- and out of concern for him, so did mine. I was struck by this bond, a common language. Millions of years of evolutionary history separated us -- but I knew what he was feeling: fear. 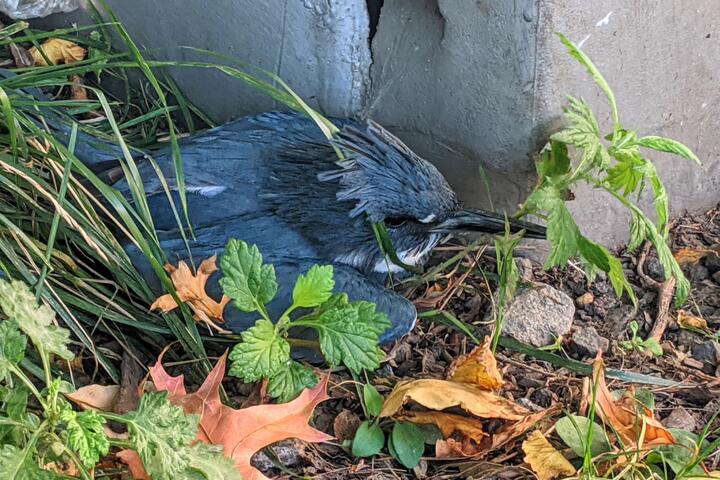 When I got home, I put him in a padded basin. I'd never seen a kingfisher on the Island before, much less this closely. He was beautiful, beyond anything a human hand could make. Silver-blue, with a stone colored beak, and a flamboyant crest.

I brought him to the rehabilitator, who lives next door, and left him in her care. Together we wondered about what had happend to him. With no visible injuries, we guessed blunt trauma. He'd either struck a window and dragged himself to where I found him, or the impact was with a vehicle on the Queensboro Bridge.

I abandoned my plans to swim that morning, and went back home, to work. I felt like I'd just gotten off a roller-coaster. Throughout the day, I wondered whether he'd manage to pull through. The next day, I checked with the rehabilitator, and she told me he was not faring well -- not eating, not moving much. When I checked again a few days later, she told me he hadn't made it. He was gone. 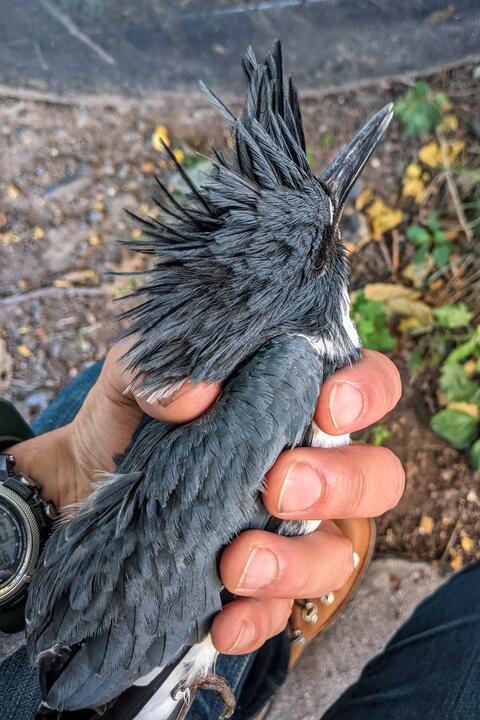 It's difficult to capture this loss with words. This was an animal I did not know, and our shared journey was less than a half-hour long. But I was -- I am still -- heartbroken. Why?

I wonder how much of the difficulty I can attribute to its symbolism. I pass by dead pigeons regularly -- one today -- and while I feel a sense of loss -- it's easier to accept. That's the course of life, inevitable. But to have come across something spectacular as it lay dying -- that hits close to home. That is the story of my generation. We have come into a beautiful world, and found it flailing on the side of a road.

It seems common, at least in the northern hemisphere, to associate this period of the year with mourning. Last Sunday, it was the Double Ninth festival in China, where it is tradition to visit ancestors' graves. The coming Sunday is Tutti i Santi -- All Saint's Day -- where the same tradition is observed in Italy. So I find myself, in the wake of this loss, in this season of mourning, reflecting on the year's departures. 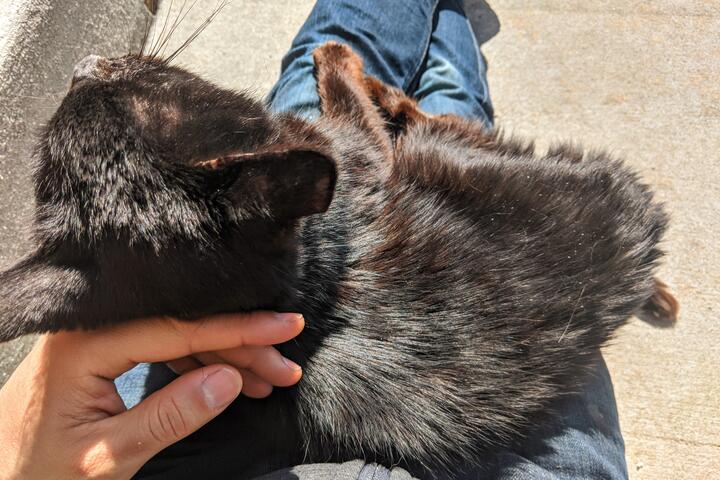 On March 21, walking through Southpoint Park, I came across one of our community cats, Cremina, who was yowling. I went to console her, and she settled down -- into my lap -- and we enjoyed the returning sun. She was sick -- and something like seventeen years old. During her remaining weeks, I went to help with her care, and she would nap in my lap for a good half-hour, waking to purr here and there. I wasn't there for her passing, on April 15, and the regret lingers. 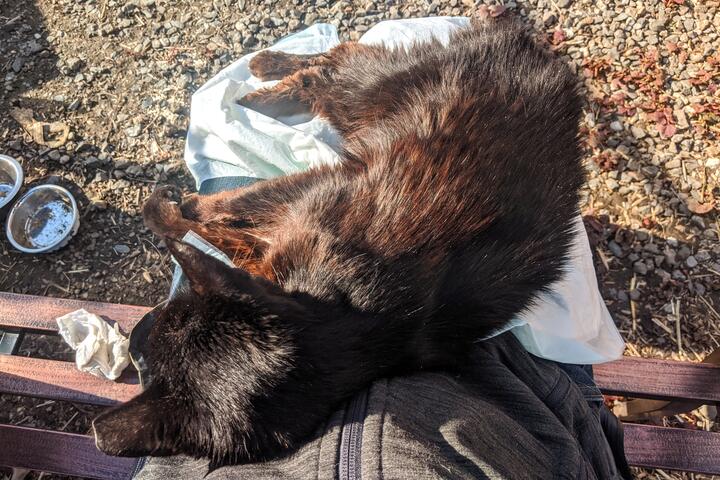 On May 7, walking with my mother around Roosevelt Island, we passed the Octagon Gardens, where I fed the community cats from 2015 to 2018. Two notables from that crew were Tom and Candy, who were inseparable. That day, too, they were sitting next to each other, probably waiting for their evening meal. But something was different. 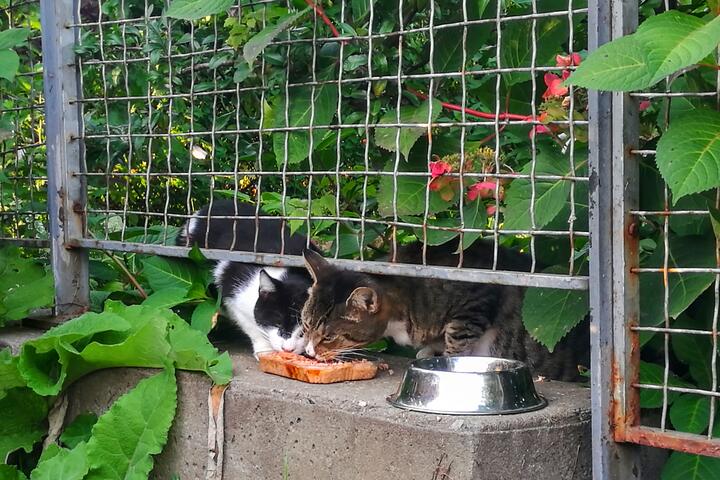 Candy had a huge tumor on her nose, which had disfigured her, nearly blocking half her left eye. This was the feeling: you're good friends with someone, you see them for three years, in all kinds of weather -- snow and rain, summer sunsets, falling leaves. They come to expect your arrival. Then life separates you, until you run into them on the street someday, and they confess -- although it's evident anyway -- that they are a terminal case. 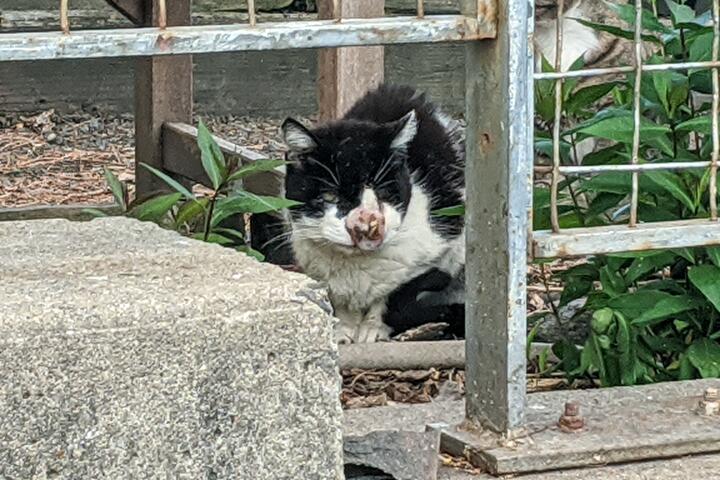 I asked Candy, "what happened?" -- and she slowly blinked at me, then looked away, as if embarrassed, acknowledging. That night, I inquired into her condition. I was told that she needed to be put down, but that, because of the pandemic, donations had dropped and there wasn't a budget for it. I, conflicted but following my intuition, offered to take care of it.

I read up on nasal tumors in cats, and set up an appointment with the vet. The next day, May 8, I borrowed a carrier and went with another volunteer to catch Candy. We coaxed her with food. She seemed in good spirits, and went to eat with appetite. Suddenly, I wasn't sure about my timing. But for better or worse, I stuck with the plan.

When I grabbed Candy to put her into the carrier, she struggled, and the tumor burst open. Crimson streaked onto the insides of the carrier. The left side of her nose, now mangled, was moist with blood and pus.

Then, I discovered I'd forgotten my wallet at home. I had to walk with the other volunteer back home, with Candy in the carrier. I hated every minute that I added to her suffering.

Finally, we went to the vet. We waited outside, and it started to rain. I looked at her -- and could tell she was hurting -- bearing her pain with the stoicism that only animals are capable of. A young woman exited the office in tears, devastated. It seemed like the whole world was mourning. The only comfort came at the end, the minute we had when she was asleep, before the injection. She looked at peace, resting lightly. 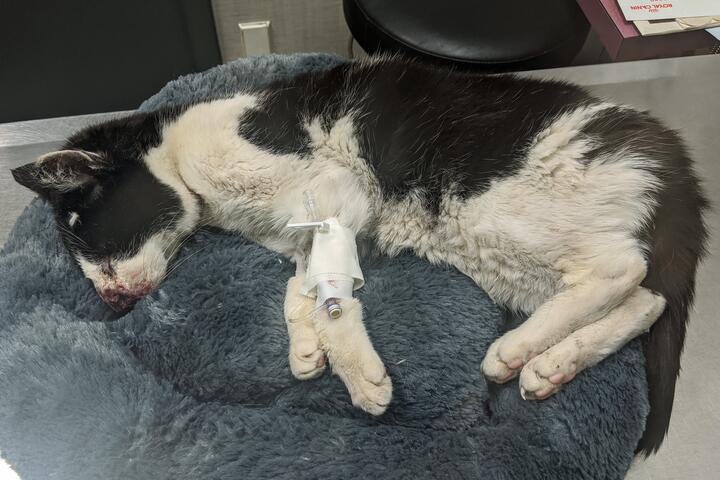 Afterwards, I kept thinking about how I'd seen her eating only an hour earlier. Was it too early? But if it had been done earlier -- before the tumor had grown so large -- it wouldn't have been as messy. She would have suffered less. Then again -- who was I to decide this creature's fate? Who was I to take away Tom's companion? 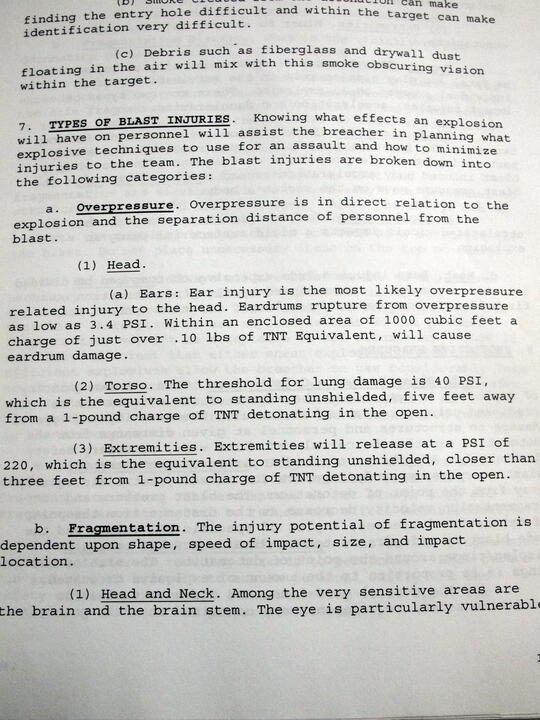 During my last year at university, I had already begun to prepare for my enlistment in the Marine Corps Infantry. I knew the experience would be psychologically demanding, even in the best case. The darker end of the spectrum included the possibility of my own death, and the taking of the life of another.

Anticipating those possibilities, I read two of Lt. Col. Dave Grossman's books: On Killing, and On Combat, which explore the inner journeys that potentially fall on members of the warrior caste. Things like survivor's guilt, helplessness in the face of horror, and the psychological stages of killing in combat: exhilaration, remorse, rationalization, and acceptance.

But it's one thing to read a map and another to walk on roads marked by it. My unit was never deployed. There was no trigger pulling, except at paper targets. All I have are blundered attempts to do the "right thing" in an emptying world. No moral clarity. The cats that I have rescued live off the canned remains of caged birds. Like combat, there aren't so much wins as degrees of devastation. 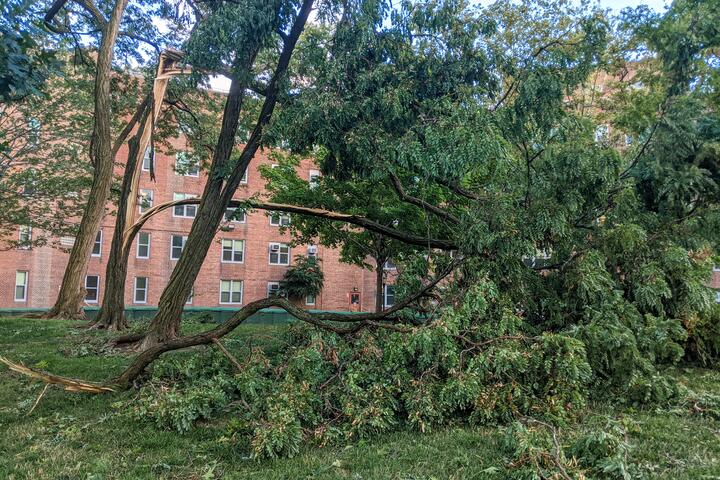 We have lost something like a hundred trees on Roosevelt Island this year. The vast part were felled by chainsaws and bureaucrats. A smaller part by highly kinetic storms, turbocharged by climate change. Walking around after Tropical Storm Isaias, I came across a sparrow sleeping on the ground, alone. She looked exhausted, and let me sit next to her for a few minutes. When she flew away, I wondered where her tribe was, and what it must have been like to bear this storm outdoors. 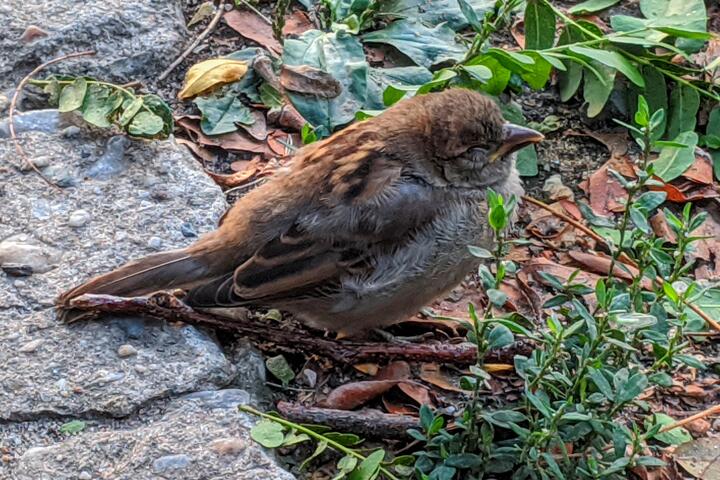 Every adolescent goes through Siddhartha's awakening, the realization that we grow old, grow sick, and eventually die. The child's fairy tales yield to recountings of our brutal history. On the personal level, I can see a path to acceptance, even though I'm not there yet. But I don't know how one comes to term with the smirking, shrugging murder of entire ecosystems.

The internet is a young place, run by a generation that, in the aggregate, has not experienced much loss. Time is catching up to us, though. Perhaps the silver lining is that difficulty will breed introspection, which in turn will blossom into maturity. In coming to terms with our own impermanence, I hope we will begin to recognize that meaning cannot be found in likes and the perpetual scroll of delight, physical or virtual. We are caretakers, guardians, of something much bigger than us, and much more enduring. It is only in returning to the world that we can give our lives meaning.